Sierra Leone, a country currently populated with approximately seven million (7,000,000) people is found on the west coast of the African continent. It was “discovered “  by a Portuguese sailor called Pedro da Cintra in the antecedent to an era Historians called the “Scramble for Africa” that attracted other big Western nations like the UK that later colonised the country from 1808 to 1961 when it gained independence. In the North and North East, it is bounded by the Republic of Guinea, colonized by the French and in the South and South East, with Liberia that was found for freed slaves from America in the 18th century but was never colonised.

The country is richly endowed with mineral resources that include diamonds, iron ore, bauxite, rutile, chrome, zircon, coal, platinum, oil and gold but is still poverty stricken because of lack of technological and industrial advancement. It is also well known around the world for its natural harbour and fresh drinking water.  Additionally it has a very rich cultural heritage with fine beaches and white sands and above all it is well known for its religious tolerance. It has heterogamous societies comprising almost nineteen ethnic groups with diverse cultures and traditions though they share commonalities. 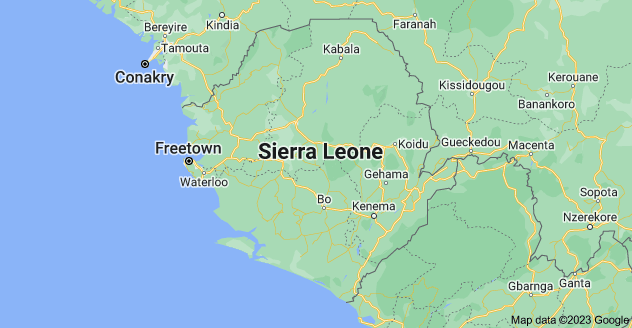 However, from 1991 to 2002, the country was engulfed by a brutal civil war that stagnated its progress. During this historic brutal civil war, the people witnessed traumatic  and horrific events like  killing of families, relatives, friends and loved ones, amputations of hands and limbs, torture, gang- raping , abductions, looting of properties, and cannibalism.  It was a war in which children as young as 5 years old had hands and limbs amputated or killed, pregnant women were hacked to death with machetes, a war in which 10 year- olds were drugged and abducted by warring factions and used as combatants. The ills and challenges posed by the war lingered up to the current time.

As the country was still rising from the ashes of war, and still grappling with inadequacies that make it ranked among the poorest in the world, it experienced an outbreak of the Ebola Virus Disease in May 2014 that has decimated a fraction of its small population. It has further multiplied the multifaceted problems that had engulfed the country. And now the country also faces another very tragic floods and mudslides that killed over 400 people, mostly children and women while thousand of people were left homeless by the floods and the mudslides.

Apart from the trauma, fear, panic, stress, anxiety and depression Ebola Virus disease, the floods and mudslides create among families and individuals in the country, they have also made many children and young people become orphans and women to become widows.  Some of these children are likely to drop out of school in post- Ebola period because of lack of educational support and care. Many of the widows have no one to take care of them as society is becoming more and more individualistic because of westernization. These people need your support to improve their lives.

The country is divided into fourteen geographical and administrative regions all of which have been affected by the Ebola pandemic. The worst affected is Port Loko in the North -West which continued to have the highest infection rates up to early 2015. The Ebola virus Disease is new to Sierra Leoneans since they are experiencing it for the first time in history.

Historically its origin could be traced way back in 1976 in Congo in Central Africa. It has affected other neighbouring countries like Sudan and Uganda. In 2014, it affected Guinea and then spread to Sierra Leone and Liberia. The prevalence of the EVD in Sierra Leone compounded the lingering effects of the civil war on the people and it has consequently caused great psychological effects on the lives of the people of Sierra Leone.

The prevalence of the EVD, floods and mudslides in Sierra Leone compounded the lingering effects of the civil war on the people and it has consequently caused great psychological effects on the lives of the people of Sierra Leone. This has made it apt for Sierra Leoneans to have access to effective professional counselling services and support to families, young people and children so as to enable them move forward with their lives. Therefore, they not only need professional counsellors or therapists but also support especially the widows, young people and children to help them cope with the hazards of life in post-Ebola period.

Counselling will help to train, educate and motivate the already traumatised and depressed minds of victims and affected persons.  Many homes are now in shambles as they have lost the bread winners. The women, young persons and children in such homes are being traumatised.