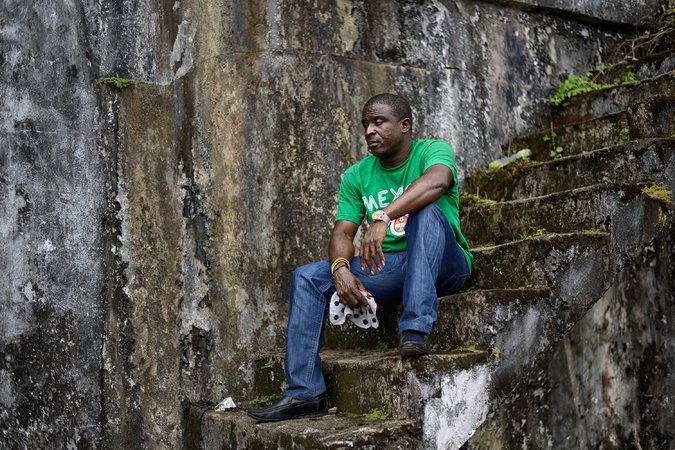 After Gaye Dumbai recovered from Ebola in Liberia, he learned that he had lost 13 relatives to the epidemic that devastated the nation in 2014. Credit Samuel Aranda for The New York Times

DOLOS TOWN, Liberia — As Gaye Dumbai came trudging up the dirt road, heading toward the overgrown cemetery where his mother is buried, villagers came out of their houses despite the pouring rain to get a closer look at him.

“Aya, Gaye, you going to your ma grave?” Naomi Tama, a local market woman, called to him, following him up the muddy path until he cut into the bush toward the grave. She trailed after him a few more yards, then stopped, overcome.

In the chronicles of the epidemic that swept through this country like the plague, Mr. Dumbai, 36, is considered a success story. He is an Ebola survivor. For almost 30 days, he battled the virus, first on his own, covered in a blanket and sitting over a pot of hot water steeped with tea leaves, the African way. When that did not work, he spent six days in a local hospital waiting to get a diagnosis, and 16 days at a hospital in Monrovia fighting the debilitating loss of blood and fluid.

But when he finally emerged into the daylight, an Ebola victor, it was to the news that greets so many others who survived the disease: His family was dead. Mr. Dumbai had lost both parents. Two sisters. One brother. Two aunts. Two uncles. Four nieces and nephews.

That remains one of the biggest curses of the disease that ravaged the West African coast in 2014 — the punishment it inflicted on entire families. With the exception of health workers, who contracted the disease by heroically taking care of sick people they did not know, most Ebola victims got sick

because they took care of loved ones. Consequently, most of the more than 5,000 people in Liberia who contracted, and then beat, the disease have become walking case studies in coping with immeasurable loss.

He is still selling used clothing on the side of the road. He is still living in his same house, about 31 miles from his home in Dolos Town. He is still hoping to get a better job, one that will properly use his economics degree from the University of Liberia.

But Mr. Dumbai’s eyesight seems to fade in and out, a consequence of a virus that continues to flummox the medical world. And like the Scottish nurse who survived Ebola and was recently

hospitalized with another Ebola-related flare-up, Mr. Dumbai has recurring health issues, including joint pain and weakness.

Mr. Dumbai, whose demeanor was quiet and reserved even before he had Ebola, has almost shrunk into himself, friends say. Now hours pass without his uttering a sound, even when he is surrounded by chattering people. His cellphone rarely rings, an anomaly in a country where everyone seems to relish constant streams of telephone calls and text messages.

It is difficult to chronicle absence, but for Mr. Dumbai, the silent cellphone is perhaps the best measure. There are no calls from his brother Rashid, a Real Madrid soccer fan, to heckle him about Chelsea, Mr. Dumbai’s favorite soccer club.

Nor are there phone calls from his sister Miatta’s husband to complain that she is not tending to his needs. Mr. Dumbai had often found himself as the de facto counselor for Miatta, who was six months pregnant when she contracted Ebola, and her husband during their marital squabbles. He had not really minded playing referee. It kept him connected to his sprawling family.

And the phone is not ringing with his fiancée on the line anymore, either. Mr. Dumbai ended their relationship a few months after he got out of the hospital when, during a fight, she blurted out that his mother did not die of Ebola, but that she had been messing around with spells and that it had backfired. Mr. Dumbai could not listen to that; the pain of losing her was still raw.

It was his mother’s sickness that engulfed the whole family. A year and a half ago, his mother, Julia, and one of his aunts paid their respects after the funeral of a pregnant woman named Patience who had Ebola. As is often the case in Liberia, many people did not accept the medical explanations for Patience’s death. People said that she had been impregnated by a married man, and that the wife of her baby’s father had put a curse on her.

At the repast, Mr. Dumbai’s mother dipped her hands into the bucket of water that other mourners used to wash their hands and face. Later, she swore that she had not touched the girl’s body or eaten any of the food there.

Mr. Dumbai’s aunt had already come down with the same sickness — fever, vomiting, weakness. His uncle was soon sick, too, then the couple’s son.

All eight of Julia Dumbai’s children came to the family home in Dolos Town when they heard their mother was sick. The news about Ebola was all over the radio by then in Liberia, and they were fearful. They moved their father, Samuel Dumbai, to another room to sleep, not realizing it was already too late. In the first few days, Julia Dumbai was talking, although she was clearly getting weaker. Mr. Dumbai tried to feed her and gave her tea. He remembers the afternoon when his hand touched her skin.

All around Dolos Town, people were sick and dying. Whispers grew about the wife of the father of the pregnant woman’s baby. Now people said all the food at the funeral had been poisoned.

And Mr. Dumbai had a fever.

Across Dolos Town, people feared answering their cellphones. Every call brought news of death, and then the questions afterward: Did you touch someone who may have touched someone who touched that person? Did you go to a friend’s house to help when they were sick? Will you pay for that act of kindness now with your life?

When the disease finally drained its last victim in Dolos Town three months later, more than 200 people in this village of fewer than 2,000 were dead.

Feeling sick in August, Mr. Dumbai made his way to the local hospital, where he writhed on a mat for six days until the diagnosis he already knew came back. Transported to the John F. Kennedy Medical Center in Monrovia, he listened as a fellow patient, a young man named Trocon, urged him to hang tough. “God will make it for us to survive,” Trocon told him. “You will see.”

Trocon died that night.But Mr. Dumbai was starting to realize that he would beat the disease. As he got stronger, he thought of life without his mother and sister Miatta. Who was going to take care of his father? Mr. Dumbai started making plans.

He would talk to Rashid about it, he decided. Rashid had not been picking up his phone, which was strange. To make things worse, when Mr. Dumbai was discharged in September, the hospital workers destroyed his cellphone. The Health Ministry gave him a certificate saying he was free of Ebola, and a ride to wherever he wanted to go.

He needed to get to Dolos Town, to start taking care of his “papay,” his father. But then his cousin Samuel found him. “Let’s go into the room,” Samuel said.

And that was when Mr. Dumbai found out that his mother, aunt, sister, uncle and cousin were not the only ones to die. Recalling that day, Mr. Dumbai dropped his voice so low it was almost impossible to hear him, as he chronicled the 13 members of his family lost to Ebola.

“He told me the papay passed away,” Mr. Dumbai said, revisiting the awful accounting from Samuel. A second sister and another uncle and cousin were dead as well. “Then he told me about Jennifer, my niece, and Sam, my nephew,” he said.

Those were Rashid’s children. If they had died, he thought, then what about Rashid?

The confirmation came. Rashid had died as well.

Mr. Dumbai was still not finished. “Finally he told me about my auntie, my mother’s sister,” he said, who had come to Dolos Town when his mother was sick, to help take care of her.

“She was the last one to die,” Mr. Dumbai said.

More than a year later, as she stared at Mr. Dumbai picking through the bush toward his mother’s grave in Dolos Town, Ms. Tama said she still did not understand how he was coping with the grief of losing so many members of his family.

Coming from Ms. Tama, that was saying a lot. Because she, too, is one of the Dolos Town walking wounded; a year ago, she had lost her sister and brother-in-law, when the disease raged through the village.

“I have her children now,” Ms. Tama said, wiping tears from her cheek. “Her twins, Prince and Princess.