by Anthony Bee-ContehPosted on November 5, 2015 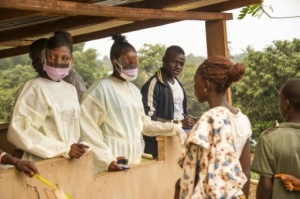 Freetown (AFP) – The Ebola epidemic is expected to be declared over in Sierra Leone on Saturday, when the west African nation will have gone 42 days without any new infections.

But jubilation over ending the outbreak in the impoverished nation, where almost 4,000 deaths have been reported, has been tempered by caution, with neighbouring Guinea still battling the virus.

Ebola was found in a 25-year-old pregnant Guinean woman and two of her children in Forecariah district, near the Sierra Leone border, in mid-October.

Her baby was delivered during her treatment and also tested positive, the World Health Organization (WHO) said in the latest of its weekly updates on the crisis on Wednesday.

Guinea is now monitoring 382 possible contacts, 141 of them deemed “high risk”, it said.

Palo Conteh, the head of Sierra Leone’s Ebola response, told a news conference in Freetown on Wednesday there were no plans for “an elaborate celebration”.

Instead, the WHO will deliver a formal declaration in the capital on Saturday of the end of the epidemic.

“I feel proud that I was, with the support of my staff, able to save the nation from the virus. If I had not tackled Ebola with my team, the nation would have perished,” he told AFP.

“We have to be vigilant as it is not the end of Ebola but the end of the current outbreak. We have fought the disease and we have won.”

Since emerging in December 2013, the worst outbreak of Ebola in history has infected a reported 28,500 people, with 11,300 deaths registered.

The real toll is widely believed to be significantly higher than the official data, however, with under-reporting of probable Ebola cases rife in the early stages.

Saturday’s announcement marks the official end of a battle which was prematurely thought to have been nearing its conclusion on previous occasions.

President Ernest Bai Koroma led a festive ceremony on August 24 celebrating the discharge of Sierra Leone’s last known patient but the optimism was shattered by the deaths of a 67-year-old woman and, two weeks later, a 16-year-old girl.

The 42-day countdown began again after the last case was confirmed free of Ebola after a second consecutive negative test on September 25.

While the primary cost of the outbreak has been in human life, the crisis has also wiped out development gains in Sierra Leone, which was devastated by 11 years of civil war ending in 2002.

The World Bank estimates that Sierra Leone will lose at least $1.4 billion in economic growth in 2015 as a result, leading to an “unprecedented” GDP contraction of 23.5 percent.

The economic damage has been exacerbated by a sharp decline in global iron ore prices and the collapse of the mining sector amid an exodus of foreign investors.

Ebola spread to Sierra Leone 18 months ago, when a young pregnant woman and an older housewife were diagnosed as the country’s first cases.

Both had attended the funeral of a widely-respected faith healer known as Mendinor, whose “powers” were renowned on both sides of Sierra Leone’s border with Guinea.

The grandmother, whose real name was Finda Nyuma, had been treating sick patients in her home village, the diamond-mining community of Koindu, a few hours’ walk from Gueckedou in Guinea, where the outbreak began.

“She was claiming to have powers to heal Ebola. Cases from Guinea were crossing into Sierra Leone for treatment,” Mohamed Vandi, the top medical official in Kenema, told AFP in August last year.

Fourteen women were infected by two distinct strains of the highly infectious virus during Nyuma’s traditional burial rites — which involve “laying hands” on the body — according to subsequent scientific studies.

Before they died they fanned out across the Kissi tribal chiefdoms, starting a chain reaction of infections, deaths, funerals and more infections which reached Freetown in July.

At the peak of the outbreak in the second half of 2014, Sierra Leone and its neighbours were reporting hundreds of new cases a week, their health services overwhelmed and social order on the brink of collapse.

The International Crisis Group (ICG) highlighted in a report last week a variety of exacerbating factors linked to poverty and weak healthcare, but also a lack of trust in the governments of the affected countries.

“In its initial phase, many west Africans thought Ebola was a ploy to generate more aid funding or reinforce the position of ruling elites,” it said.

ICG also pointed to a failure of the international community, including the WHO, which it said “stalled for far too long on declaring an international health emergency, then proved incapable of mounting an effective response”.