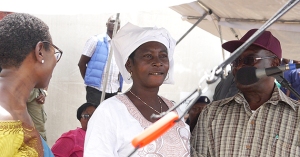 Sierra Leone will today mark the achievement of twenty-one days since the last Ebola sufferer was discharged from hospital.

This milestone comes as the cumulative number of new cases stands at 8,704 since the crisis began in March last year, and the condition of British nurse Pauline Cafferkey worsens in London. (Photo: Last survivor to be discharged from hospital in Sierra Leone).

It is now thirty-three days since the last case of Ebola was reported in the country, with a total of 3,589 people confirmed dead from the virus. No deaths have been reported since the 13th September 2015.

But as the country edges closer to being declared Ebola free on the 8th of November, there is the nagging worry about the fate of the 4,300 people that the government and medics believe to have recovered from the virus.

While their longterm prognosis may be uncertain, what is troubling is the health condition of this group of Ebola recovered sufferers, many of whom are slowly losing or have completely lost their eye sight.

Many too, are suffering from multiple debilitating health conditions, such as extreme lethargy, muscle weakness, aches and pains, lack of appetite, insomnia, frequent infections, miscarriages, and neonatal deaths.

Several of these recovered patients have also subsequently died as a result of post Ebola complications.

But this encouraging news in Sierra Leone comes, as British Nurse Pauline Cafferkey fights for her life in intensive care at the Royal Free Hospital in London, where she was admitted last week after she was found to be carrying the ebola virus, despite being declared Ebola free nine months ago.

The 39 year old Pauline Cafferkey, who contracted the virus whilst working at the Kerry Town Ebola Treatment Centre in Sierra Leone last December, is today critically ill and her condition is said to be deteriorating.

Speaking from Freetown to the Sierra Leone Telegraph after hearing this sad news yesterday, Sierra Leone’s presidential hopeful and former senior UN executive – Dr. Kandeh Yumkella sends this message to Pauline and her family: “Get well soon Pauline Cafferkey. Our thoughts and prayers are with you, as we wish for a complete and restful recovery. You risked your life in order to save others, our nation stands forever grateful.”

After one month of receiving what is described as the best care in one of the best hospitals in the world, Pauline was discharged – apparently having made a full recovery.

But last week, it was discovered that the Ebola virus was still present in her blood and tissues.

A statement released by the hospital said: “We are sad to announce that Pauline Cafferkey’s condition has deteriorated and she is now critically ill.”

As a precaution, Pauline’s contacts have been offered vaccination. So far only about twenty have taken up that offer.

Pauline Cafferkey2A statement released by the Hospital in London said: “All 58 close contacts are being closely monitored. This includes a period of 21 days since their last exposure where they will have their temperature taken twice daily, restrictions placed on travel and, in the case of healthcare workers they have been asked not to have direct patient contact during this period.

“The 25 who were vaccinated will undergo additional monitoring because the vaccine is still being evaluated.

“It is important to stress once again that there is no risk to the general public. Ebola is not spread through ordinary social contact, such as shaking hands or sitting next to someone. Nor is it spread through airborne particles.”

But what many doctors and health researchers are finding perplexing, is the fact that the body tissues of those that are thought to have fully recovered from the deadly virus, can harbour the Ebola infection several months after, as a recent WHO study in Sierra Leone discovered.

The ministry of health in Freetown, this week announced that results from a preliminary study into persistence of Ebola virus in body fluids, show that some men still produce semen samples that test positive for Ebola virus, nine months after onset of symptoms.

“Sierra Leone is committed to getting to zero cases and to taking care of our survivors, and part of that effort includes understanding how survivors may be affected after their initial recovery,” said Amara Jambai, M.D., M.Sc., Deputy Chief Medical Officer for the Sierra Leone Ministry of Health and Sanitation.

“Survivors are to be commended for contributing to the studies that help us understand how long the virus may persist in semen.”

The first phase of this study has focused on testing for Ebola virus in semen because of past research showing persistence in that body fluid. Better understanding of viral persistence in semen is important for supporting survivors to recover and to move forward with their lives.

“These results come at a critically important time, reminding us that while Ebola case numbers continue to plummet, Ebola survivors and their families continue to struggle with the effects of the disease. This study provides further evidence that survivors need continued, substantial support for the next 6 to 12 months to meet these challenges and to ensure their partners are not exposed to potential virus,” said Bruce Aylward, WHO Director-General’s Special Representative on the Ebola Response.

More than half of men (26/40; 65 percent) who were tested between four to six months after their illness began were positive, while one quarter (11/43; 26 percent) of those tested between seven to nine months after their illness began also tested positive. The men were given their test results along with counselling and condoms.

“EVD survivors who volunteered for this study are doing something good for themselves and their families and are continuing to contribute to the fight against Ebola and our knowledge about this disease,” said Yusuf Kabba, National President of the Sierra Leone Association of Ebola Survivors.

Why some study participants had cleared the fragments of Ebola virus from semen earlier than others remains unclear. The U.S. Centers for Disease Control and Prevention in Atlanta is conducting further tests of the samples to determine if the virus is live and potentially infectious.

“Ebola survivors face an increasing number of recognized health complications,” said CDC Director Tom Frieden, M.D., M.P.H. “This study provides important new information about the persistence of Ebola virus in semen and helps us make recommendations to survivors and their loved ones to help them stay healthy.”

The report recommends that until more is known, the more than 8000 male Ebola survivors across the three countries – Sierra Leone, Guinea and Liberia, need appropriate education, counselling and regular testing so they know whether Ebola virus persists in their semen; and the measures they should take to prevent potential exposure of their partners to the virus.

Until a male Ebola survivor’s semen has twice tested negative, he should abstain from all types of sex or use condoms when engaging in sexual activity. Hands should be washed after any physical contact with semen, the researchers warn.

For more information on this study please go to: http://www.who.int/reproductivehealth/topics/rtis/ebola-virus-semen/en/