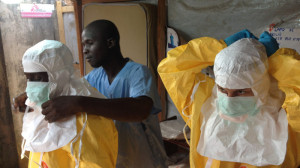 According to international reports, as the Ebola epidemic retreats across West Africa, international health authorities are turning their attention to the little understood long-term effects of the deadly virus on survivors. There is little research on patients cured of the tropical fever, but the World Health Organization (WHO) acknowledges that many are experiencing crippling complications long after walking out of treatment units. Matshidiso Moeti, the WHO’s new head in Africa, told AFP that Liberian survivors had been reporting a range of problems, including sight and hearing impairment.

“We need to be aware that (complications) may be occurring and pay attention when people are being treated in case there is something that can be done to help them,” she told AFP in the Liberian capital of Monrovia.

Moeti said the UN agency had initially focused on keeping people alive in its battle against the worst ever outbreak of the virus, which it says has left almost 11,000 people dead in Liberia, Guinea and Sierra Leone.

“So we are very much learning about this,” Moeti told AFP.

More than 26,000 people have been infected with Ebola since the outbreak began in December 2013, according to the WHO, which admits the official mortality figures are probably some way short of the real death toll.  The epidemic has ravaged the three countries, infecting hundreds of people a week during its peak last autumn, but the spread has slowed to a crawl.

Liberia, once the hardest hit country, has reported no new cases since the last patient died on March 27 and was buried a day later. Moeti’s comments were prompted as she toured Monrovia’s health facilities and Ebola-hit communities on Wednesday, where she met Beatrice Yordoldo, the last Liberian patient to leave a treatment center alive. Yordoldo, who was discharged on March 5, said the “majority of the survivors” she had spoken to were complaining of impaired sight and hearing, headaches and other complications. The WHO acknowledged the issue as early as October, when it carried an interview on its website with a psychosocial support officer in Kenema, in eastern Sierra Leone.

“We are seeing a lot of people with vision problems. Some complain of clouded vision, but for others the visual loss is progressive. I have seen two people who are now blind,” Margaret Nanyonga said.

Nanyonga, who calls the problem “post-Ebola syndrome”, said visual problems had affected around half of Ebola survivors in Kenema, while others complain of joint, muscle and chest pain and extreme fatigue.

“We need to understand why these symptoms persist, whether they are caused by the disease or treatment, or perhaps the heavy disinfection,” Nanyonga said.

With research thin on the ground, health authorities have no real measure of the extent of the problem, but it doesn’t appear to be confined to Africa. American nurse Nina Pham, who was infected while caring for a Liberian man at a Texas hospital, told the Dallas Morning News last month she had experienced hair loss, aches and insomnia after being given the all-clear in October. According to reports, aches and fatigue are common side-effects in patients recovering from serious infection, resulting from the immune system’s release of chemicals to fight the illness. But experts admit they don’t yet know if this is what is going on inside the bodies of Ebola survivors.